DermaZinc® was founded in 1997 by a person who knows first-hand the physical and emotional pain of chronic skin conditions. He was a sufferer of severe plaque psoriasis. Frustrated with the far-reaching impact of his condition on his life, he dedicated himself to developing a topical treatment. One that would both relieve his physical symptoms quickly and provide long term clearance so that he could enjoy all that life offers. He put together a small team of analytical chemists, physicians, researchers, and investors. In less than a year they developed DermaZinc®.

It has since become one of the most effective and one of the bestselling topical treatments for chronic skin disorders. DermaZinc® has been recommended by physicians to treat various forms of Dermatitis symptoms ranging from mild to severe conditions. It has also been used for years to treat conditions of the scalp including flaking and itching associated with Dandruff. Those who suffer from mild to severe cases of psoriasis and eczema have reported benefits. DermaZinc® also works extremely well in helping relieve the symptoms of other - more general - skin conditions including, rashes, poison ivy, bug bites, ringworm, and various types of skin fungus. 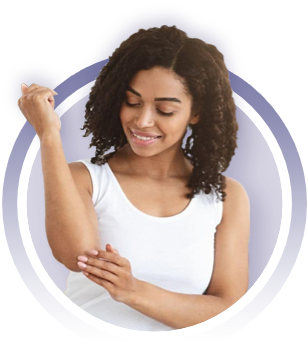 Through ingredients like zinc, menthol, oatmeal, and shea butter, DermaZinc® products provide relief and care for various skin conditions. With a selection of original products to choose from, you choose what works for you.

These Statements Have Not Been Evaluated By The Food & Drug Administration. This Product is Not Intended To Diagnose, Treat, Cure or Prevent Any Disease.